Week 3 and 4 of Distance Education (Homework 2)

Please right-click in the picture and open in another tab to see the (larger) original picture! 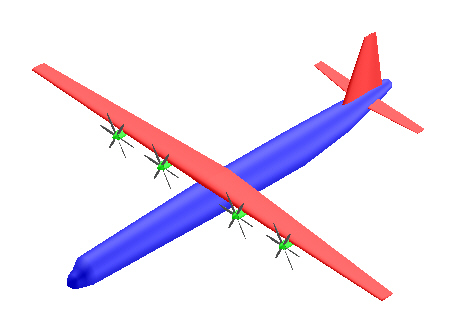 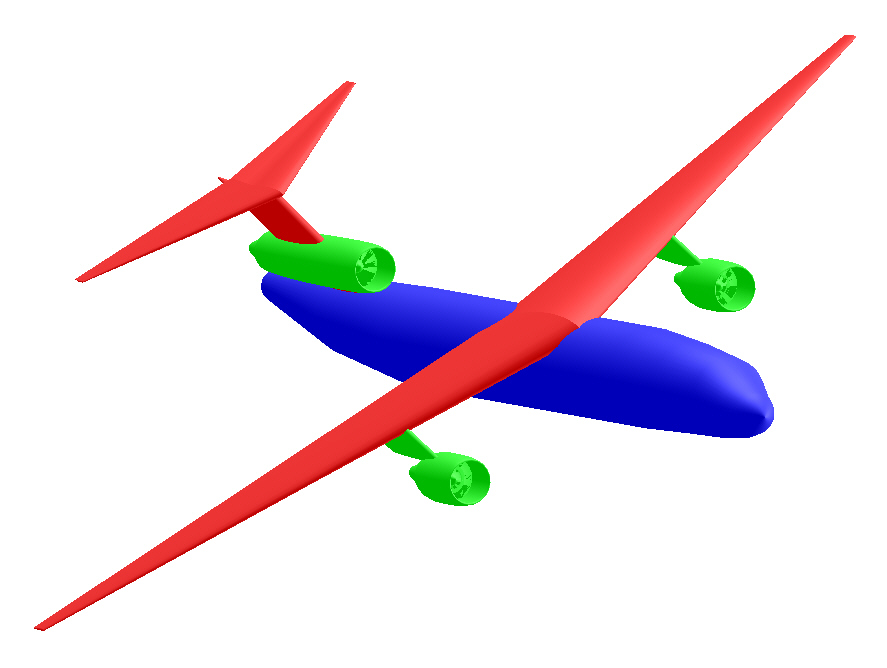 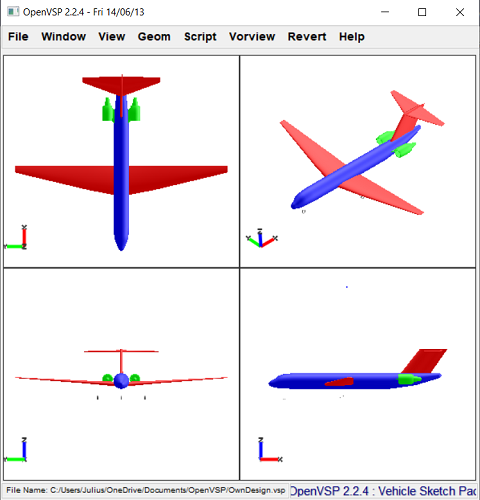 A single-aisle aircraft aimed at the middle of the market segment with 250 pax. A natural laminar flow wing is used. This results in a reduced cruise speed at Mach 0.75 and reduced wing sweep. The engines are mounted at the tail and hence a T-tail is necessary. The aircraft has a high aspect ratio to minimise induced drag.
The engine pylon was manually adapted in OpenVSP to achieve a tail-mounted engine. 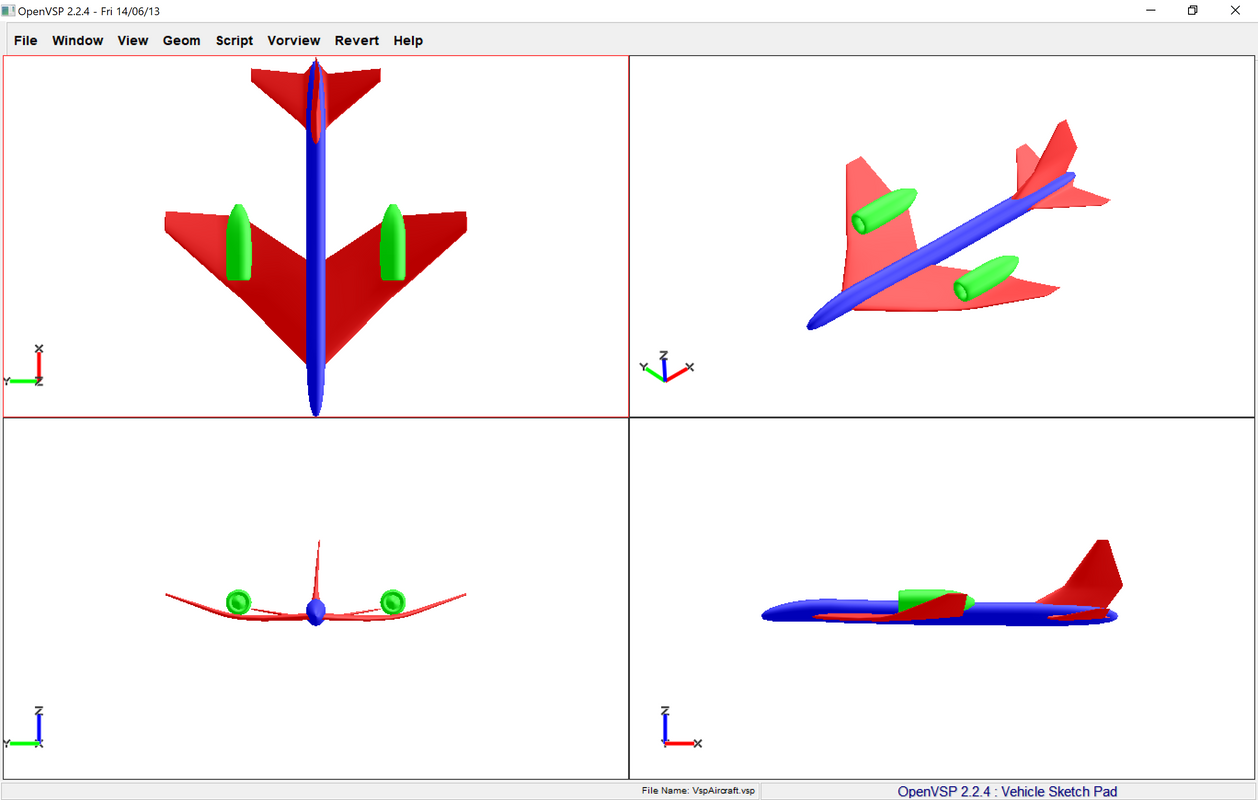 An unconventional aircraft with twin jet engines. The MACH number is approximately around 1.1, and thrust produced should be around 130 kN. It has a vertical tail and a dihedral horizontal stabilizer.

An unconventional aircraft configuration, this design may be an intermediate between conventional 'cigar-shaped' fuselages and BWB. With this UWB approach, it is hoped to be possible to combine the best of two worlds; superior aerodynamics of a BWB and the lower  manufacturing cost of a classic fuselage aircraft. 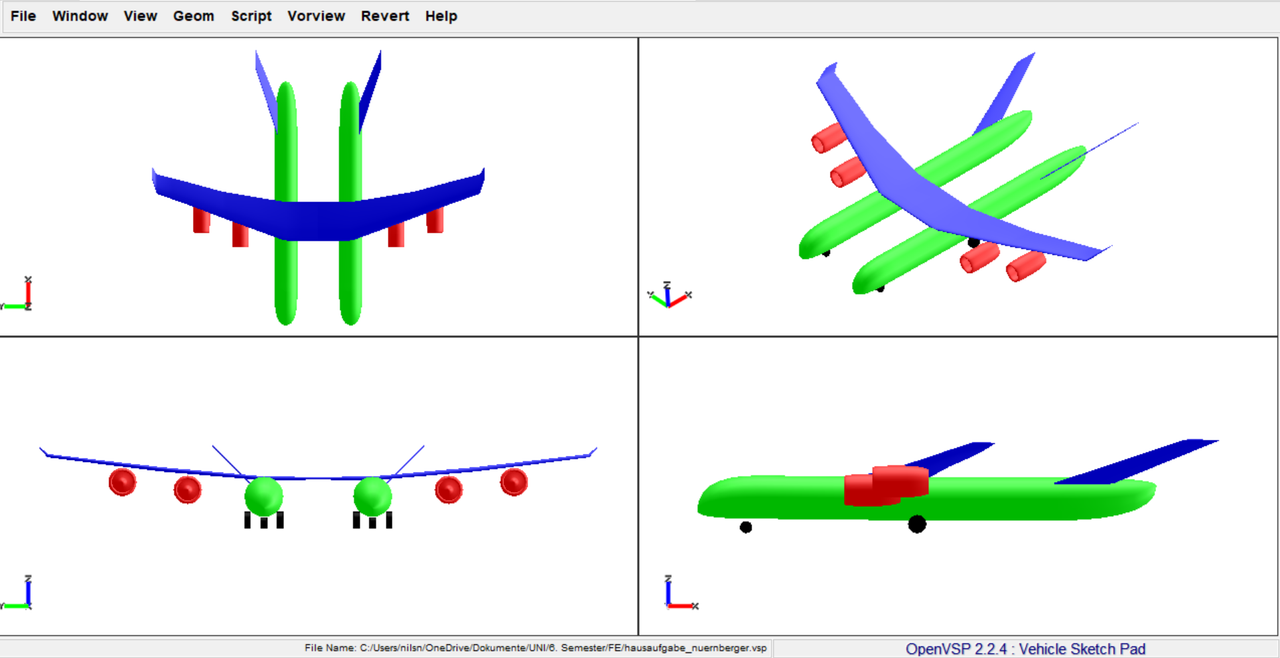 The V-Jet is a commercial airliner with a length of 37,6m and a wingspan of 50m. Each of the two fuselages features a 3-3 cabin layout which allows it to carry up to 360 passengers. A comparable aircraft in passenger capacity usually has a bigger wingspan which requires a higher ICAO span category what leads to higher costs. Due to the big aspect ratio and the V-Tail, fuel consumption could be kept small which leads to a range of 5000nm at a cruise Mach number of .78.

An unconventional passanger aircraft design with canards and multi sweept wings. Driven by two fuel efficient turboprop-engines with counterrotating propellers its cruise mach number is around M=0.8. This aircraft is aiming at the short and middle range market and has a passanger capacity of 100-150. 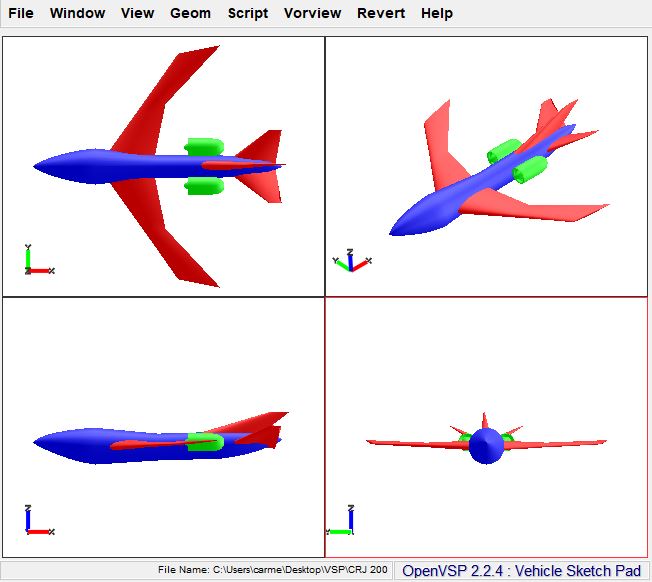 50 passenger aircraft with twin jet engines, which should be able to produce approximately 40 kN each. The cruise Mach number is around 0.8. It has mid-swept wing, a dihedral horizontal stabilizer and a vertical tail.

This is an unconventional configuration with a hybrid wing body geometry. It has a thin delta wing and two jet engines. The plane is meant to cruise at around 1.5 Mach and hold around 20-30 people. 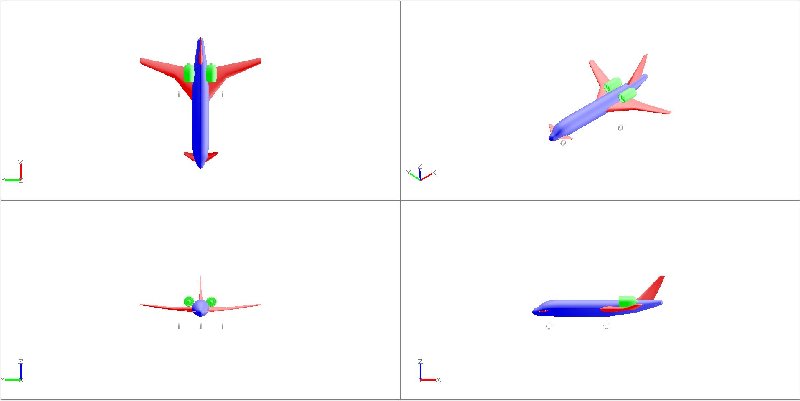 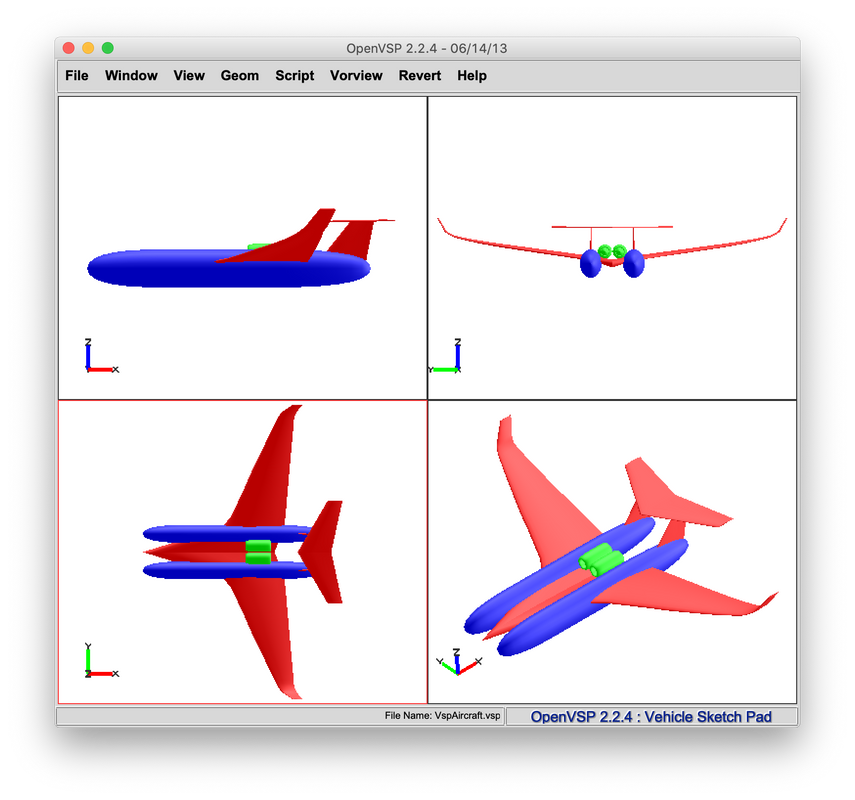 An unconventional aircraft with two fuselages, which will allow twice as many passengers for a lower fuel price than conventional aircraft. The engines, which are located between both fuselages, allow a weight reduction because the wings must support less torque in the root, making them lighter and slimmer with a wing span of 50 m, and therefore, more aerodynamically efficient. The wing consist of a high wing with positive dihedral and positive sweep angle, which lead to a more stable aircraft. At the same time, the engines produce a more efficient thrust because they are located nearer the longitudinal axis of symmetry, which is the direction of the aircraft. The reduction of the chord at the tip of the wing and the winglets reduce significantly the induced drag. The aircraft has a high horizontal stabilizer due to the location of the engines and two vertical stabilizers.

Concept 21: A near-future short and medium-haul aircraft as successor of the A320-family with next-generation fuel-efficient engines with high bypass-ratio for around 200 passengers. 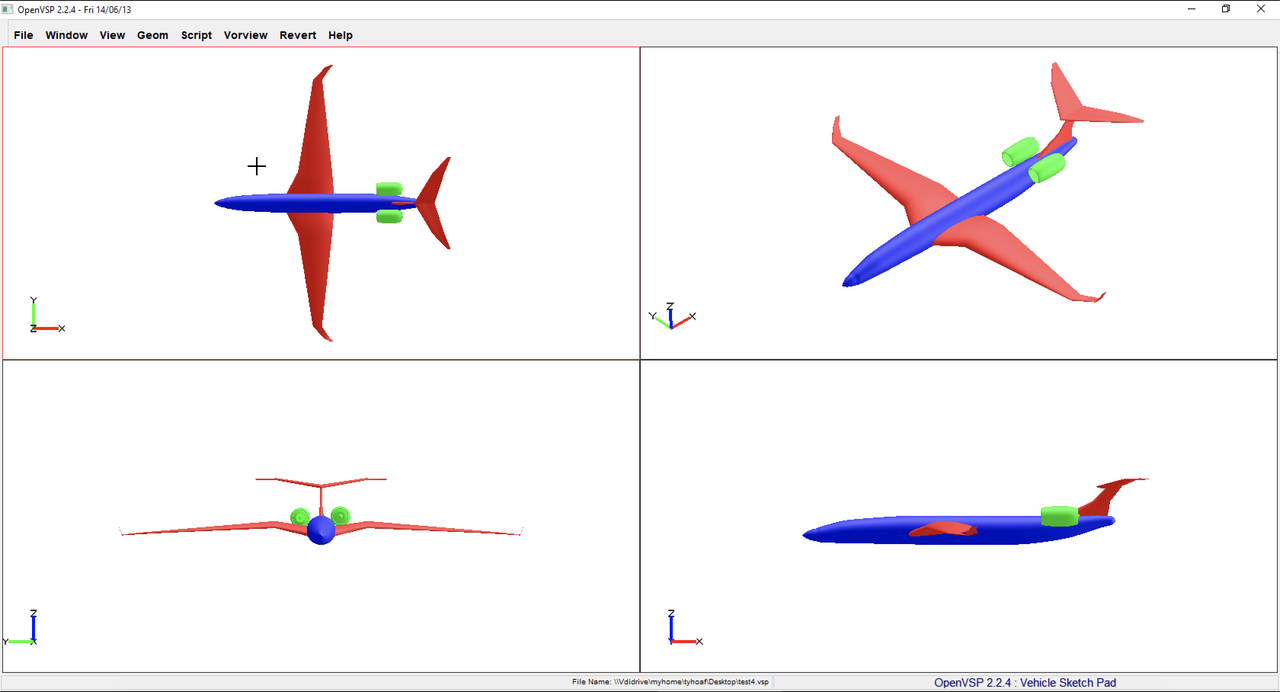 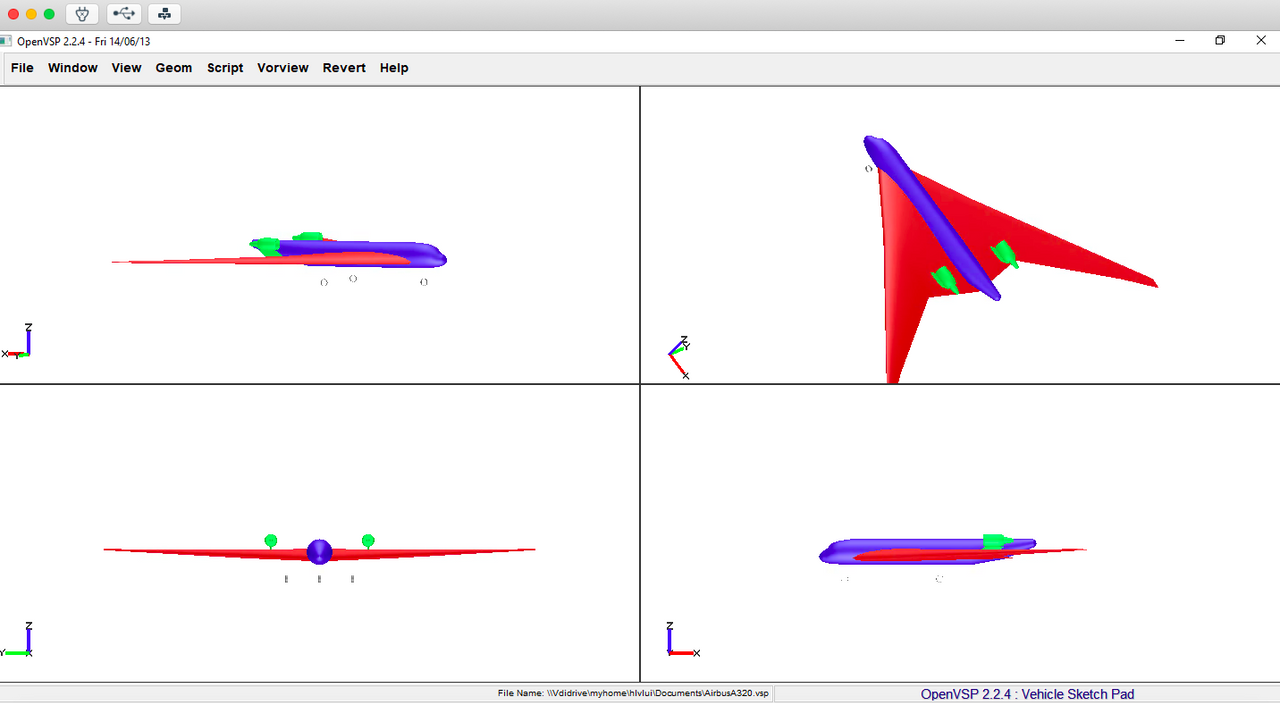 An unconventional aircraft which allows 200 passenger on board with twin rear jet engines. The MACH number is approximately around 1.1, and thrust produced should be around 240 kN. It has a notched delta wing. 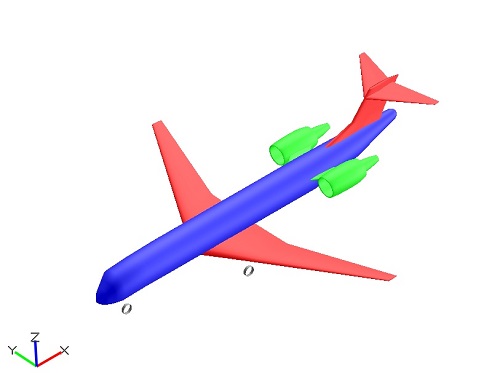 The picture above show my design of a business jet for 14 passengers
and a cruise speed of 0.85 Mach. It is a conventional T-tail design with two engines, connected via
pylons to the aft fuselage. The total engine thrust should be 35.872 kN.

Propeller driven aircraft for 100 Passengers at a slower cruise speed of Mach = 0,5. It has a larger aspect ratio of AR = 12 for better glide performance and a low wing position.

This is an unconventional military aircraft with a single seat, equiped with very powerful twin engines. It has a canard delta wing. The topspeed is around 2500 km/h. The range of this aircraft is around 3000 km.

This is the Mini Baluga with a hydrogen fuel cell propulsion system. It has a capacity of 4 people with enough storage for a holiday trip. Even skis or surfboards are meant to fit. Its V-Tail gives it an attractive look and the pusher configuration in combination with the electrical drive train reduces cabin noise significantly. Mach 0.2, Range 1500km, +-5gs. Gear is not shown. 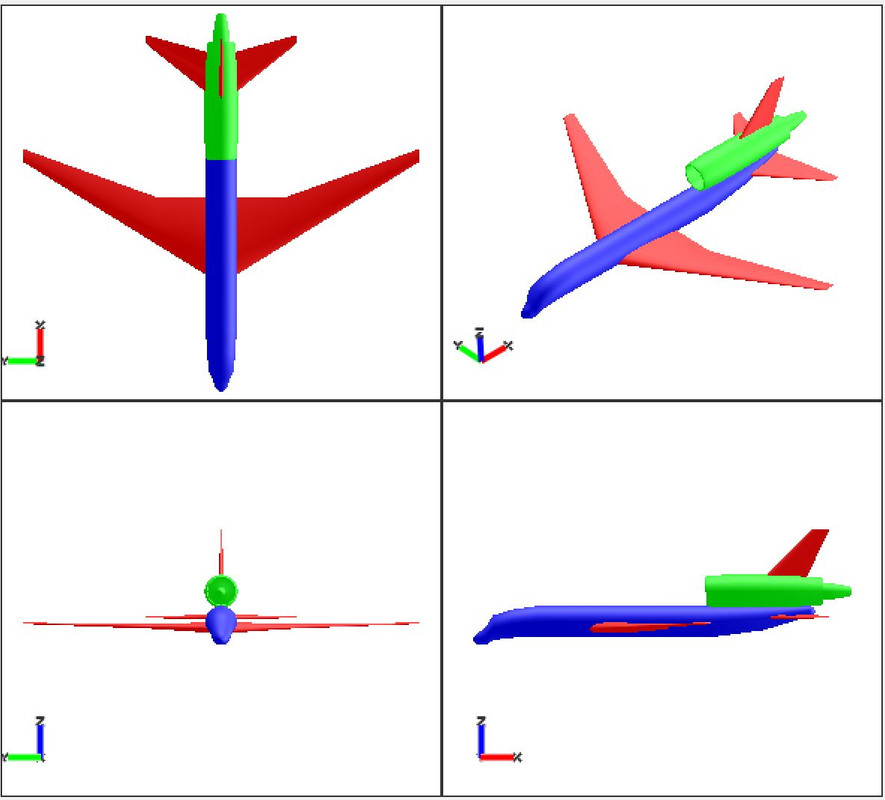 Fast single engine business jet for 8 passengers using OpenVSP-Connect. Cruise Mach number 0.92. An engine thrust of 29.256 kN is necessary to lift the aircraft into the air. 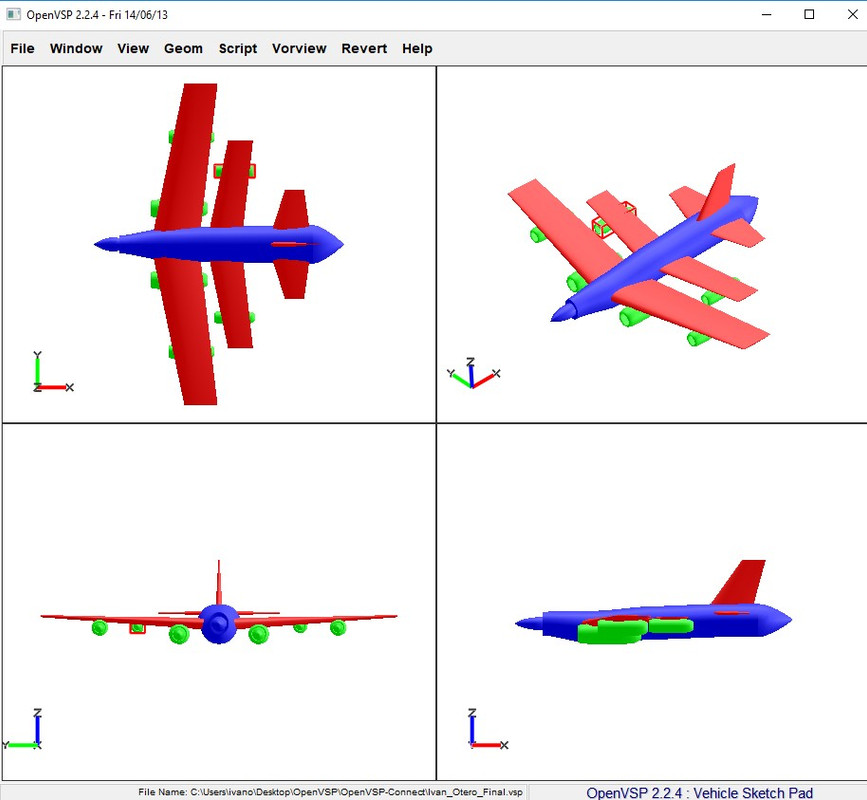 This is an unconventional configuration of a two wing aircraft as alternative to an aircraft with one large wing. With the multiples engines it is aiming the middle range market and has a passenger capacity of 150. 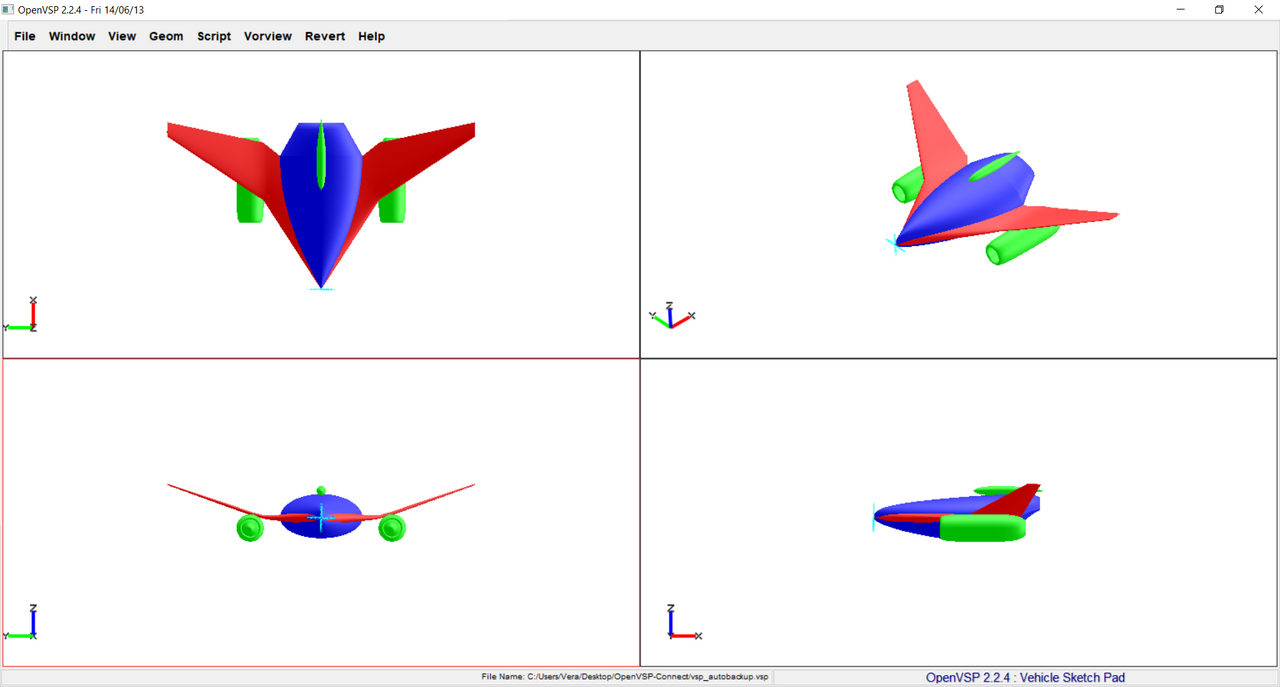 A three engine passenger airplane with an unconventional fuselage. The cabin could be divided into two sections, single aisle in the FWD part of the aircraft and twin aisle in the AFT part. Cargo compartments are located in the back and the lower part of the fuselage. With my design i wanted to experiment with a wider and flatter shape of the fuselage to optimize the aerodynamic behavior, inspired by the blended wing body design. 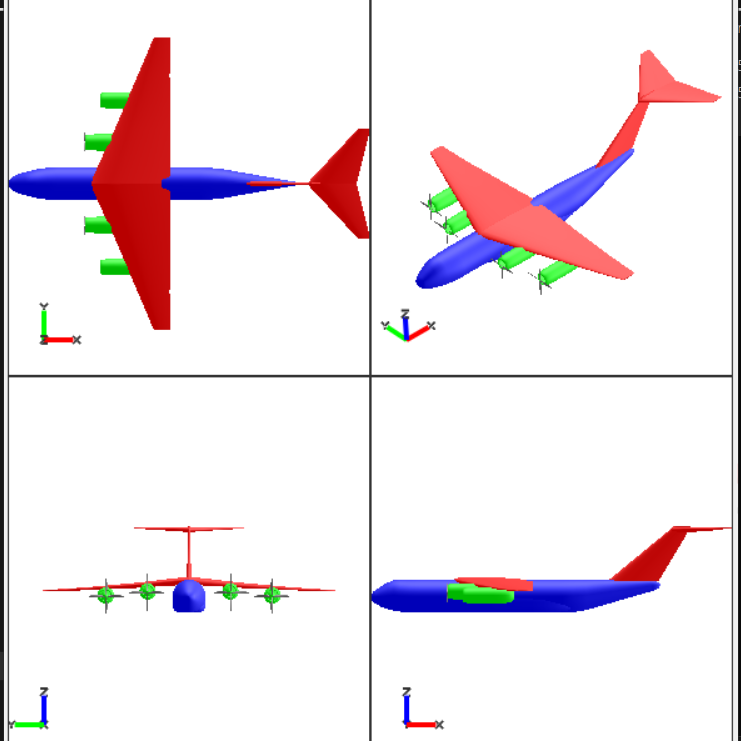 A conventional propeller driven aircraft that reaches up to Mach 0,7 and can be used to transport cargo or passengers 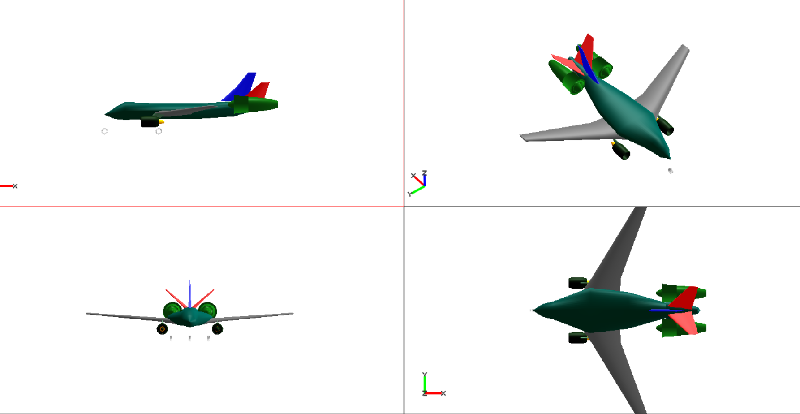 with Mach number of 0,8  and two engines under the wings and two bigger engine in the empannage. With ellipse shaped fuselage that gives spacious impression , this aircraft designed to load up to 150 passengers. 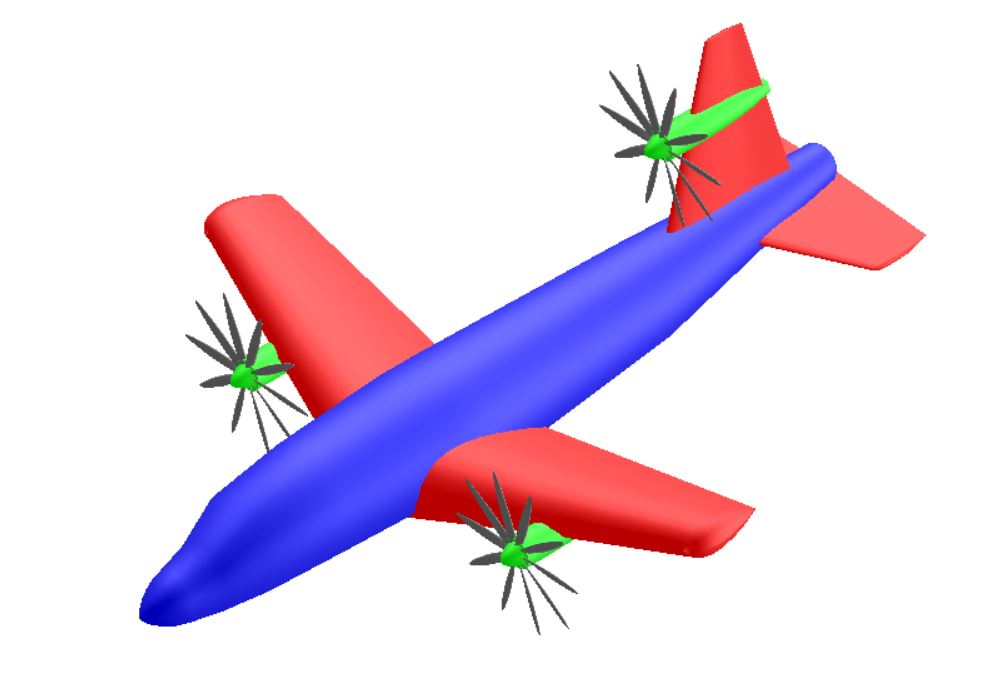 This unconventional aircraft is designed for 70 passengers and has a mach number of 0.7. It is equipped with three propeller engines, each consisting of 10 blades with a total engine power of 2000 kW.

The unconventional configuration consumes significantly less fuel and will revolutionize aviation in the future.
The aircraft consists of a flattened fuselage, the shape of which flows into the wing.
Such aircraft are called flying wing aircraft.

Above all, the aerodynamics are much better than those of conventional aircraft.
By mounting the engines on the wing we can noticeably minimize the aircraft noise.
In the long term, an electric drive is planned.
Airlines can fly more than 100 passengers economically from A to B.

This is a 80 passanger aircraft which will fly 0.9 Ma. It is 30m long, has a diameter of 3m and an T-tail design, so the engines don't interfere with the horizontal tail.

A Single aisle aircraft for 70 passengers with a T-Tail and high wing configuration, based on the Airbus A320. Cruise Mach number of 0.6 and 4 propeller engines with 6 blades each and propeller diameter of 1.629 m.

A small unconventional 4 person aircraft with V-tail. The engine and propeller in the rear should reduce the interior noise. Design and efficiency (with small wingspan) are the main focus (for hobby pilots). Designed in OpenVSP Connect.